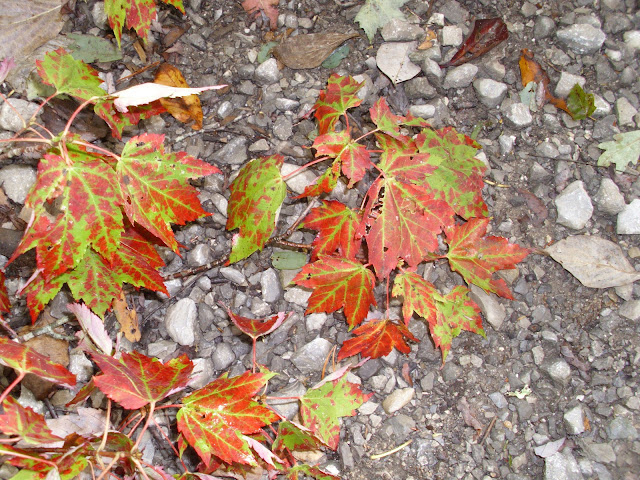 Old Sugarlands Trail - GSMNP
September 29, 2011
According to the National Park Service, there are approximately 1500 black bears in the Great Smoky Mountains National Park.  This past Tuesday morning, I met one of them up close and personal.  Unlike the dreaded grizzly bears of the west, black bears really don't want to eat you.  In fact, they are more intent on getting away from you than you are from them.  Unless of course, you mange to  a) get between a mother and her cubs,  b) startle or scare one, or  c) happen to encounter one that has been habituated to humans because of being fed (thank you so much for that, silly tourists!!).  Most hikers crave the experience of seeing a bear deep in the backcountry.  I can assure you that I am NOT one of them, but nonetheless. there we were about 2 1/2 miles down the Old Sugarlands Trail when I saw him.  He had already seen us and had stopped eating.  In our circumstance, we did exactly what we were supposed to do and he was courteous enough to do exactly what HE was supposed to do (turn around and amble away).
But I will tell you that it scared the living daylights out of both my hiking bud and me.  Because it was one of those moments when you knew your life and your safety at that point in time was out of your hands and dependent upon the actions of a giant 300-400 pound ball of black fur.  And for me, it was a brief moment of true fear.
After staring at us for what seemed like an eternity, he moved far enough away for us to pass and began eating again, so we headed on up the trail.  Did we consider going back the way we'd come?  Absolutely, but had we done that, it would've only served to make us more apprehensive about the next time.  And there will be a next time.  It might be next Monday when we hike again or it might be 25 years from now.  But turning back from fear was not the right thing to do.  And I am so thankful that we didn't although I'll have to say, we were extra vigilant for the remainder of the hike especially on our return trip past the same spot.
That fear will always remain and I consider it a healthy fear.  But on the other hand, having been part of a "real" encounter and seen that the bear truly does exhibit the behavior exactly as it should, I am much more comfortable heading back into the woods and while never letting down my guard, will no longer take each step wondering "oh my gosh, what if we see a bear."  Knowledge and experience is power.
On October 1, 2006, with little preparation and not much hope, I began a journey to lose weight which resulted in a 65 pound weight loss over the next 15 months.  I don't know why it clicked that time when I'd tried so many times before.  Neither can I really pinpoint when the hope actually began to return that I was going to be successful.  But I do know this.  There was never a point in that entire 15 months when fear was not my constant companion.  Fear of failure.  Fear of no one noticing.  Fear of criticism of my eating choices.  Fear of regaining (yes, I was worried about that before I ever lost the first pound - it had happened so many times before).  Fear of not being able to handle myself when food settings were out of my control.  You name it - I feared it!!
But one by one, I slayed those dragons.  Just like that bear, when I did the things I was supposed to do, my body did exactly what IT what supposed to do and as a result, I lost weight steadily and dare I say it, easily!
I wish that I could say I had maintained that entire 65 pound loss as I approach this five-year anniversary, but you know that isn't the case.  And I've got some new fears to face and some old dragons that need to be slayed again.  My body is five years older now and those were significant years with many changes.  The dragon I cannot seem to slay is the one that keeps telling me I can't lose it again.  And that fear is every bit as real as the adrenalin that shot through my body when I saw that bear just off to my left.
So on the eve of that important anniversary, I'm sitting here in my den thinking about that gorgeous trail that I meandered along seeing things like this: 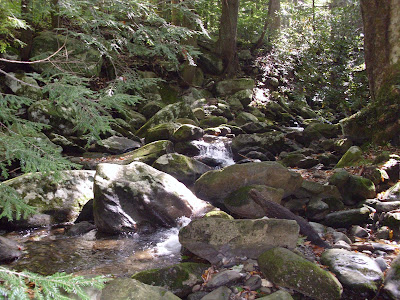 Originally published in My Trip Journal on July 17, 2011

Posted by Sharon at 4:13 PM No comments:

East of the Missouri, Mississippi and Ohio Rivers

Posted by Sharon at 4:02 PM No comments: